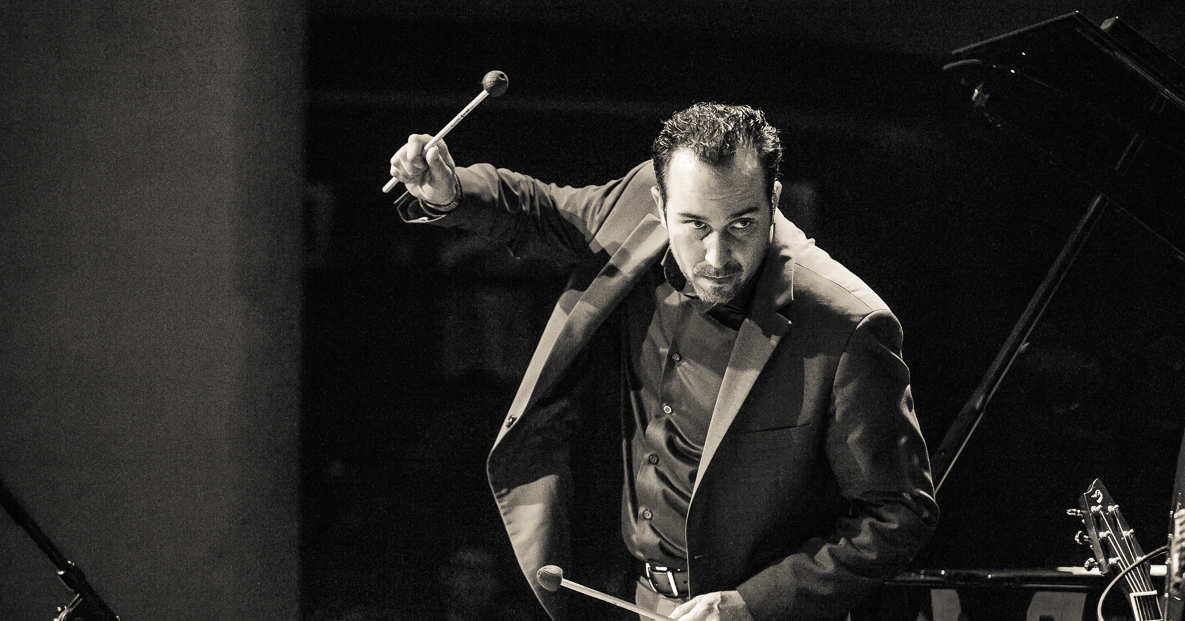 “Christian is one of the most creative musical director, pianist and vibraphonist in the world.” – Stephen Sorokoff, Broadwayworld.com Feb 2017

CHRISTIAN TAMBURR is an internationally renowned vibraphonist and pianist with touring and performances in over 65 countries around the world. Downbeat Magazine recognized him with the “Outstanding Solo Jazz Performer” award and the “Critics Choice Top Rising Star” award on vibraphone. He currently leads the critically acclaimed Christian Tamburr Quintet featured recently in a string of sold out performances at Lincoln Center in New York City in November of 2015 and the Kennedy Center in Washington DC in April 2016. His newest album “People Talk” topped the 2016 national jazz charts for 2 months and led to touring in Shanghai China, Doha Qatar, Abu Dhabi, and various festivals throughout the US. In 2014 and 2015 Christian held the ‘Artist in Residence’ at Florida Institute of Technology where he presented concerts, educational outreach, and established a curriculum for recognizing the value of the arts and its influence on technology. In addition to his public performances he currently travels as CEO and lead presenter for Sonic Leadership (www.sonicleadership.com) bringing unique musically inspired presentations on leadership and training to companies around the Globe. He is the currently pianist and arranger for vocalist Clint Holmes and the on staff composer and arranger for ShowHive and Norwegian Cruise Line Productions.

Christian has worked as Musical Director for Latin vocal legend Julio Iglesias, Cirque du Soleil in Macau China and Penn & Teller in Las Vegas. He has performed on vibraphone as special guest with pianist Dave Brubeck, as featured solo percussionist with Michael Feinstein and headlined with the Charlotte Symphony. He has performed private concerts for NBA basketball legend Michael Jordan, and was hired to entertain at the highly publicized surprise birthday party for actress Julia Roberts in New York City. Christian’s first album “Move” was released as a part of a Starbucks Gift Set available around the US.

Christian and his groups have performed at some of the most prestigious venues around the world including The Kennedy Center for the Performing Arts (Washington DC), Dizzy’s Club Coca Cola at Lincoln Center (NYC), The Blue Note (NYC), Ravinia (Chicago), The Brubeck Institute (Stockton, CA) Yoshi’s Jazz Club (Oakland, CA), Pizza Express Dean Street (London), Olympia Theater (Paris), Jazz at the St. Regis (Doha, Qatar), The Central (Shanghai, China), Motion Blue (Tokyo), Monte Casino (Cape Town, South Africa), The Bellagio Hotel and Casino (Las Vegas), The North Sea Jazz Festival (Amsterdam), The Atlanta Jazz Festival, The San Jose Jazz Festival, The Chandler Jazz Festival, and the Jacksonville Jazz Festival. Since 2006, Christian has produced “The Jazz at Sea” music spotlight, performing and featuring some of the top names in jazz onboard Regent and Oceania Cruise Lines. Christian works as a producer, arranger, and composer in many genres. His music can be heard on TV, full-length motion pictures, and on-stage productions around the world. As an educator and lecturer, Christian travels to High Schools and Colleges presenting workshops and master classes on performance, composition, arranging, and music business.