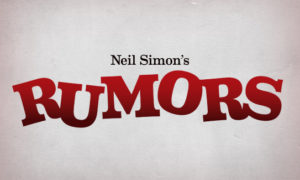 In Neil Simon’s classical farce Rumors – the top thee People’s Choice for a play – four couples arrive at the 10th anniversary celebration of New York’s deputy mayor and his wife, only to find the mayor with a gunshot wound and the wife totally missing. The madcap antics are set in Palisades at a dinner party that goes topsy-turvy from beginning to end.

The deputy mayor’s lawyer, Ken, and his wife must get “the story” straight before the other guests arrive. The inner turkey hasn’t even seen the oven yet.

As the confusion and mis-communications mount, the evening spins off into classic farcical hilarity.

Simon’s enjoyable romp is one of his celebrated comedies. During its Broadway run, the show received Tony and Drama Desk nominations. Called “straight up funny” and the “perfect antidote to reality.”