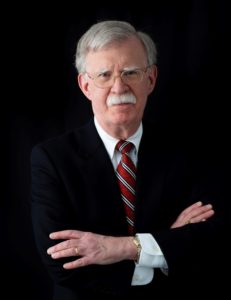 Ambassador Bolton will review the national security challenges and opportunities facing the Biden Administration  — political, military, and economic  — and the positions it inherited from its predecessors.

John R. Bolton served as Assistant to the President for National Security Affairs from April 9, 2018, until his resignation on September 10, 2019. From January 2007 until April 2018, he served as a Senior Fellow at American Enterprise Institute in Washington.

John R. Bolton was appointed as the United States Permanent Representative to the United Nations on August 1, 2005, and served until his resignation in December 2006. Prior to his appointment, Ambassador Bolton served as Under Secretary of State for Arms Control and International Security from May 2001 to May 2005.

Throughout his distinguished career, Ambassador Bolton has been a staunch defender of American interests. While Under Secretary of State, he repeatedly advocated tough measures against the nuclear weapons programs of both Iran and North Korea and the proliferation of weapons of mass destruction worldwide.  He led negotiations for America to withdraw from the 1972 Anti-Ballistic Missile Treaty so that the Bush Administration could proceed with a national missile defense program.

This is a hybrid event. Members can visit in person/ guests can view it via live stream.  To learn more about this event or register as a guest, visit https://wachh.org/event-4272865.
+ Google Calendar+ iCal Export