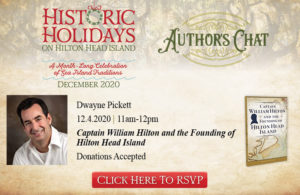 Captain William Hilton and the Founding of Hilton Head Island

Behind the pristine beaches and world renown of Hilton Head Island lies a history that dates back to the early exploration of the nation. In 1663, William Hilton, a mariner born in England, was hired by a group in Barbados to find new lands for them to settle. Hilton led an exploration of the Port Royal Sound area, where he named a high bluff of land Hiltons Head as a navigational marker for future sailors. The island began as a sparsely populated area on the fringe of English settlement in the late seventeenth and early eighteenth centuries, when it was called Trench’s Island on some maps.

You must register in order to receive the Zoom link to the Authors Chats! You will receive the link prior to the event.