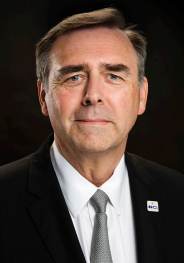 The evolution of the cyber threat is an excellent recommendation for the speaking topic.  Kevin Scheid will help us understand different approaches the Government and Business are taking, the challenges therein, and how the World will need to defend against bad actors in the future to decrease our vulnerability. Today, cybersecurity threats are everyone’s problem.

Mr. Kevin J Scheid of the United States has served the Federal Government for over 30 years in several progressively senior positions at the White House, Intelligence Community, and the Department of Defense. In November 2016, Mr. Scheid was selected by the 28 Nations of the North Atlantic Treaty Organization (NATO) to serve as General Manager, NATO Communications and Information Agency, effective July 1, 2017. For the past two years, Scheid was on assignment from DOD to the MITRE Corporation as the special advisor to the CEO and President. He led a corporate-wide project to expand MITRE’s international engagements with U.S. allies and partner nations. MITRE is a not-for-profit corporation that provides strategic and technical support to the U.S. Department of Defense and other agencies throughout the Federal government.