An event every week that begins at 7:30 pm on Friday and Saturday, repeating until July 4, 2021 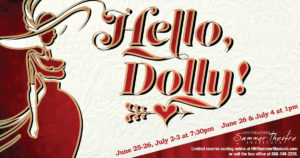 The Southeastern Summer Theatre Institute leaps back into the spotlight this summer with the Tony-winning classic HELLO DOLLY! SSTI, a Lowcountry tradition for fourteen years, brings top talents from the stages of Broadway and pairs them with elite performers cast from the nation’s top high schools and universities. The resulting product is a theatrical experience that leaves audiences coming back year after year. HELLO DOLLY, always an audience favorite, will be directed by world renowned Broadway performer and director Jacob Brent. As an actor and director, Jacob is most well-known for his many collaborations with Andrew Lloyd Webber, appearing in not only the 1998 CATS filmed production as Mr. Mistoffelees, but also in the production’s record-breaking performances in both London’s West End and on Broadway. HELLO DOLLY takes the stage on June 25th, 26th and July 2nd and 3rd at 7:30pm, and June 27th and July 4th at 1pm. All performances are at the Seahawk Cultural Center at 26 School Road. Tickets are available at HHISummerMusicals.com or by calling 866-749-2228.