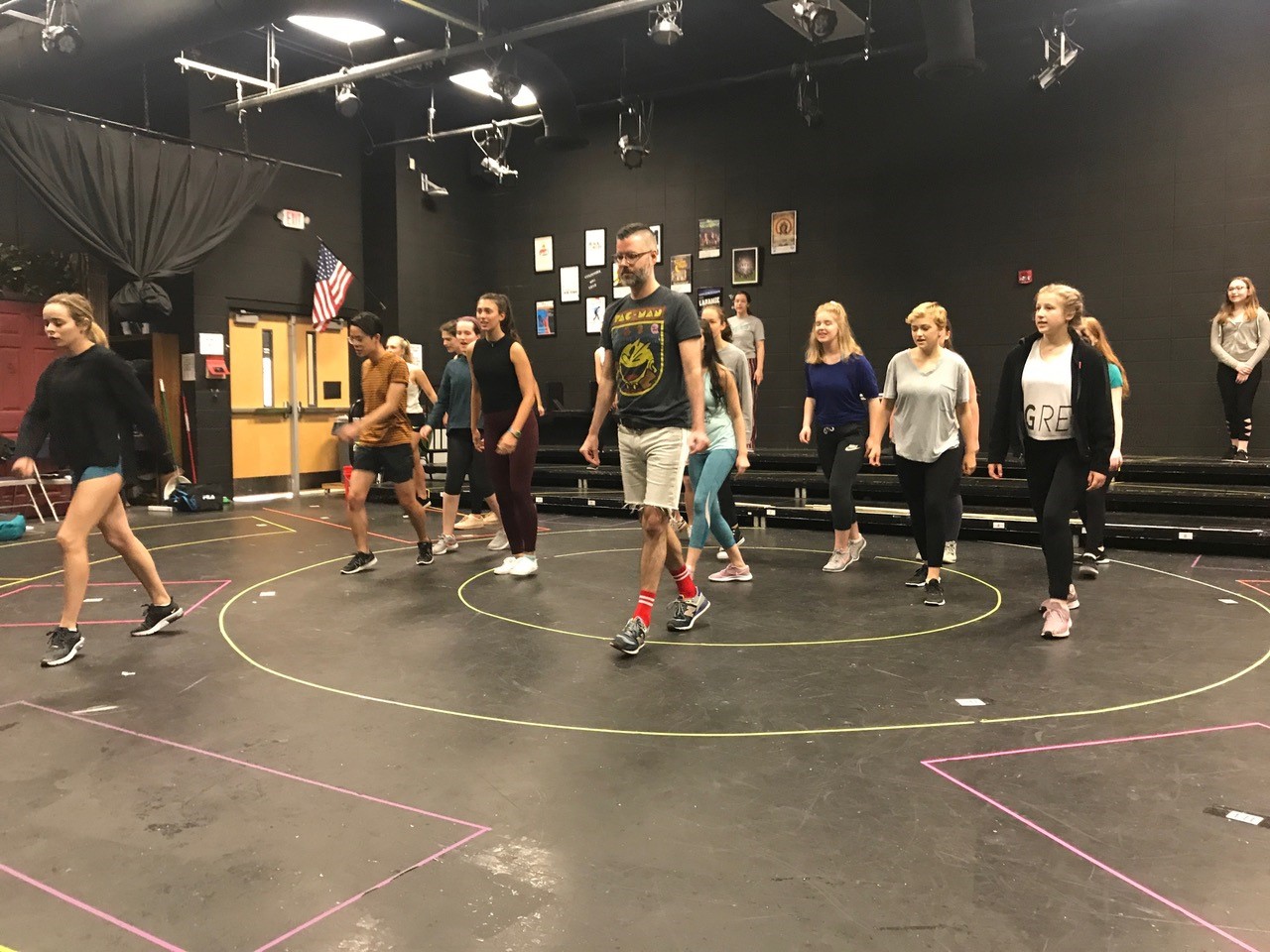 A Glimpse of the Magic Behind SSTI’s Tuck Everlasting

Producer Ben Wolfe conjures up magical worlds. He’s already done it twice this summer with his Southeastern Summer Theatre Institute productions of Chicago and My Way. This time out it will be Treegap, New Hampshire in Tuck Everlasting.

What happens behind the scenes to create this theater wizardry? And if you’re working with new young talent, like Wolfe does, how does it all get put together? I head over to the Seahawk Cultural Center to find out.

SSTI, founded by Wolfe, now in its eleventh season, is a performing arts training program that draws accomplished high school and college age performers and technicians who hail from across the country and from far-flung places like Paris, Hong Kong, and Singapore. Here they get to work with seasoned directors, choreographers, designers, and technical experts from Broadway and beyond.

Wolfe leads me on a behind-the-scenes tour as Tuck begins to take shape. We step onto the stage which, without its usual curtain barrier, stands open to the back wall. The three- week countdown to opening night has already begun. It’s only the third day of rehearsals and already the theater buzzes with activity as carpenters, electricians, sound engineers, technicians—professional and apprentices alike––build the complex set that embodies this 19th century countryside. By the following week this same stage will be a landscape of fantasy elements: Trap doors that actors pop up and disappear in. Big revolving circular platforms and bridges delineating hills, valleys, and water. Wooden clouds puffed up with batting and shimmering with LED lights. And a galaxy of upside down umbrellas sparkling from the heavens.

Tuck, a family-friendly musical, centers on a girl who stumbles across a fountain of youth, a spring whose waters offer eternal life. Amid singers and dancers with twirling umbrellas and a musical score with Scottish echoes reminiscent of Brigadoon, eleven-year-old Winnie yearns for a life beyond the confines of Treegap and runs off to see a traveling fair. Along the way she encounters a family, now stuck in time after imbibing the eternal life-giving waters, as well as her nemesis––Man in the Yellow Suit, a villainous carnival worker plotting to sell bottled immortality.

While Master Carpenter Lilly Gonzalez, aka “The Sawdust Kid” (All SSTI staffers are given whimsical monikers), and her student crew are working on one of the revolving wooden wheels, Technical Director Kyle Spens (Construction Commander) is awaiting an order of a quarter-mile of 1 ½ inch manila rope. This hefty line, the kind used to tie up large ships, will be used to suspend umbrellas and clouds, mark perimeters, and work the mechanism that allows dancers to manipulate those big circular platforms.

Over on stage right, Master Electrician Seth Brown and his assistants study the schematic, preparing to take down and reconfigure the massive lighting battens which had been used earlier for Chicago. And in the back of the house, “Audioland” as Wolfe calls it, the sound engineers are setting up mics to amplify the cast and onstage band.

Now Wolfe and I move on to the black box where Director-Choreographer Joe Barros is taking twenty-five cast members through the complicated opening scene while Musical Director Andrew Austin, who’s already worked out vocals with lead singers, plays the piano. Not only do the performers have to learn production numbers but they must navigate the intricate set. To help, outlines of its topography along with height dimensions (nine feet here, seven inches there) are taped onto the floor, representing circular platforms, trap doors, and water. What’s more some of the principals will switch roles over Tuck’s run so those actors must study two different parts within the show.

While we watch, Barros, a Broadway veteran who specializes in new work development, comes up with concepts at lightening speed. He starts off blocking out moves, only to change thoughts mid-stream. “Wait. I’ve got a better idea,” he says and the young cast rolls with it.

Now Wolfe and I veer off to the wig room where Hallie Moore (assistant to Wig and Makeup Designer Karina Branson) wields hair dryers, pins, and rollers to fashion nineteenth century hairstyles on a line of manes sitting atop wig blocks. Further down the hall, costumers, under the direction of Lead Designer Kathy McGill, cut patterns, stitch outfits, and explore the digital wonders of a new embroidery machine. Gayle Bress, a Bluffton wedding gown designer, puts finishing touches on an elaborate mourning coat while Sydney Poole sews buttons on Man in the Yellow Suit’s eye-popping ensemble. The latter is another bit of stage alchemy. The fasteners are fake. Velcro rules here, allowing performers to tear off dresses, pants, and shirts for lightening-quick changes.

Final stop is the prop room where apprentices Madisen Frazier and Bela Marcus are puzzling out how to fashion “bones” to make their prototype toad “leap.” While they work, Jeremy “Proplem Solver” Smith hunches over a computer surfing for buckets and vintage umbrellas. The latter are Director Barros’s new concept for this production and they are particularly critical because Tuck will need at least sixty-four of them––fifty-one onstage and fourteen spares for when one inevitably breaks. Smith shows off a beautiful old bumbershoot with a broken rib that he snared for a dollar on Ebay. They’ll repair it, dust it with spray paint, light it up, and then suspend it aloft with fourteen others above the clouds.

SSTI’s Tuck Everlasting debuts on July 27. That means talent, music, tech, costumes, props, and set must be ready for the opening curtain. In the interim, Wolfe will have to keep track of hundreds of details not to mention food and housing for Tuck’s thirty-seven performers and tech apprentices.

And to think that within 48 hours of closing night, the whole set and the talented young cast and crew will disappear like Brigadoon…  Catch it before it does.