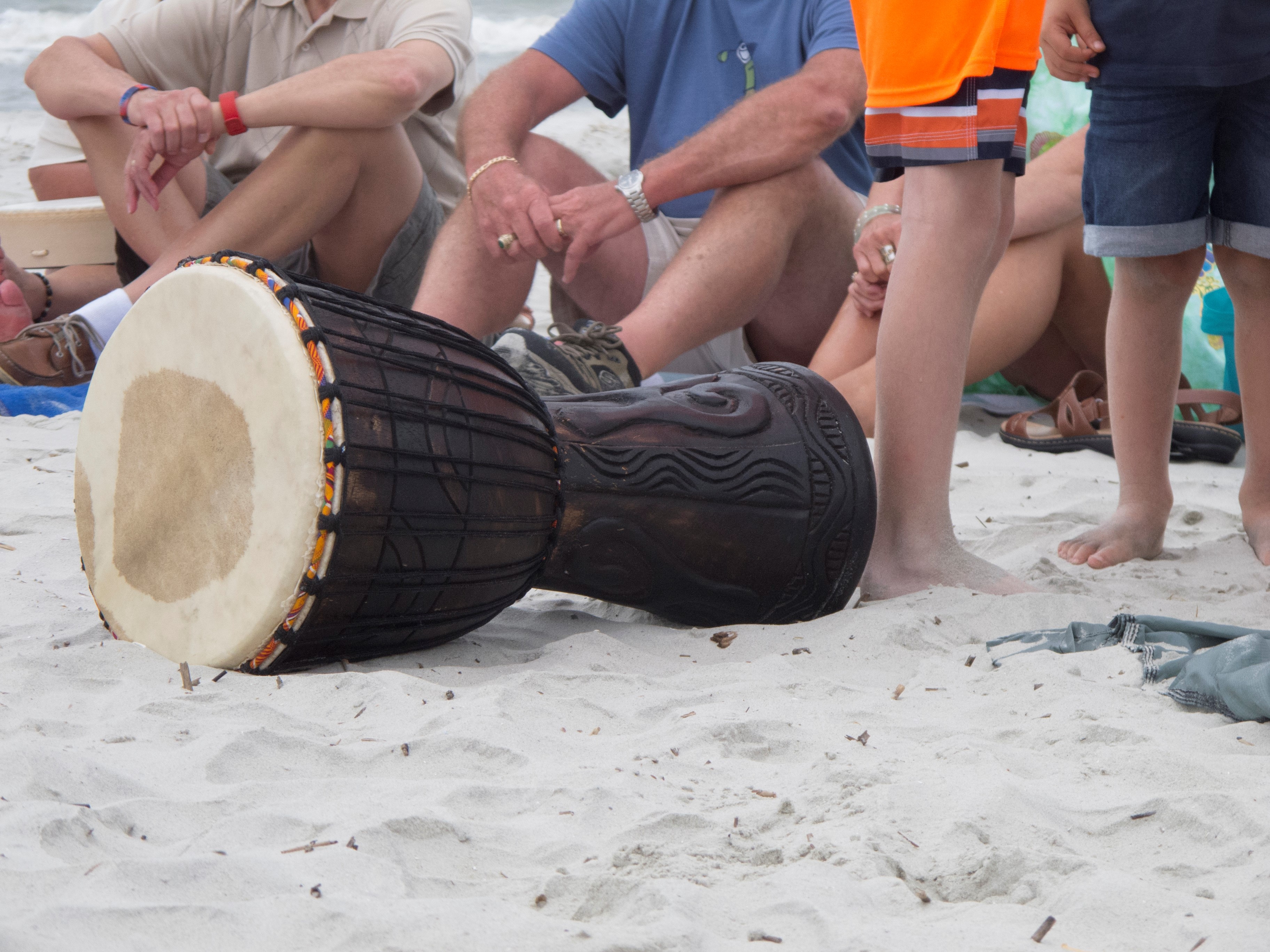 Drumming on The Edge of the Sea: Drum Circles on the Beach

A new moon was rising. Although a thick blanket of gray clouds had obscured our view of this Flower Moon (so called because of season’s new growth), the sixty or so of us, who’ve gathered on the island’s Coligny Beach to celebrate take it on faith. We’ve brought drums—African djembes, bongos, congas, tablas—along with tambourines, gongs, rattles, maracas, and rainsticks. One guy even totes a plastic bucket—handy to sit on but also a good surface to beat out a rhythm. Anything—pots, pans, spoons, an empty pizza box and dowel––that make a percussive sound will do.

I’d first heard about this event when a group called the Hilton Head Vibes posted a flier around town and on social media. “Full Moon Community Drum Circle” it had announced. “Raise the Vibe with Your Tribe.” It would be the first of monthly drumming events to come. What’s more it was free and all were welcome.

So here we are, folks of all ages assembled in a loose ring of blankets, mats, towels, and folding chairs, waiting for the leader Ben Hughey of the band Näytiv to arrive. Meanwhile I scout out three of the other organizers. The first I encounter is Tanya Colucci, whose résumé reads shaman/energy healer, trainer, yogi. An athletic brunette with cropped hair, she has dusted her face with gold glitter. Her five year-old son Matteo, his dark hair playfully streaked with blue, sports a shirt that proclaims “Use Your Smile. Change the World.” He offers us rubber shakers but we’ve come prepared with drums and rattles so he give them to a couple who’ve come to watch. His generous impulse to share instruments is one that we’ll see duplicated among the participants the entire night.

Soon Jessica Golden, arrives in a floaty blue sundress. By day she’s a yoga instructor at Jiva Yoga Center, a fitness trainer, and co-owner of Island Head Watersports. Tonight she’s brought a steel tongue drum to play. The flying saucer-shaped instrument has a dome with a painted Om icon in its center, surrounded by smaller domes or tongues. Golden shoots me an amused grin when I ask about her unorthodox drum sticks—slender shafts of wood tipped by bouncy balls. She strikes the drum producing a exotic gong-like tone that speaks of other worlds and galaxies.

We’re soon joined by Candace Blair who steps onto the beach carrying a five-foot long rainstick. When she upends the hollow tube the sounds of a tropical downpour greet our ears. Blair, a kundalini yoga teacher with specialties in sound healing, gong meditation and cacao ceremonies, had recently returned from Benirrás Beach in Spain where she’d participated in a world-famous community drum jam. Back on Hilton Head, she’d run the concept past Golden, Colucci, and then Hughey. It had been a meeting of the minds. And an island drum circle was born. “What world needs more opportunities to join together in celebration,” she declares. “And what better way than with music and dance and the sounds of the sea?”

She’s so right. The combination is powerful.

By this time Ben Hughey has settled into the sand on the rim of the loosely arranged circle alongside Nate Douglas of the band Pretty Darn on the conga. Later Pretty Darn’s Kyle Wareham will join in too. Unlike some drum circles I’ve been to in the past, tonight we have professional musicians to lead us amateurs. Let the games begin.

The three woman start the celebration by talking about heart experiences—opening oneself up to creative possibilities. “Our intention is to bring people together. Letting go of the things that no longer serve you,” says Colucci. Her words stir hope. We’re creating an oasis in the polarized culture that surrounds us. “Come together to embrace the fun and vibrate as one,” she exclaims. And we do.

Hughey’s hands start beating out a rhythm on the brightly patterned djembe and we all jump in. For the next two hours this small patch of beach pulsates with the sound of bare hands and sticks on drum skins, claves clicking together, the jingle of tambourines, the clanking of rattles. As Hughey plays, he changes things up from time to time. New patterns emerge and we all fall into the groove.

My husband Dick pulls out the Irish bodhrán he’s brought but neither of us can remember how to play despite the fact we’ve both taken lessons. And frankly, it doesn’t really matter. He settles on a easy motion of swiping at its goatskin with the tipper. I, on the other, hand, opt for slapping my small Mexican drum with my palms. I watch Ben Hughey and try to emulate what he’s doing. His hands move rapidly so it takes a little bit but soon I’ve got it figured out—I lean back and go into an easy rhythm.

As we drum, the waves grow rougher and the ocean is full of whitecaps. Wind whips sand around and I feel it in my hair, my clothes, and even my teeth. But despite the sandblasting, the wind also creates beautiful images—women in flowing dresses in the breeze, children padding across the sand, ribbons of streamers trailing behind them. While some drummers close their eyes and play trancelike, I’m a people watcher. I switch to a shekere, a rattle covered with a netting of beads, and survey the crowd: tee shirts, shorts, slacks, beach cover-ups. Long hair, short hair, beards, clean shaven. Tattoos abound and a woman in a hippie headband could be right out of Central Casting for the Summer of Love. A few wrap their heads in scarves as protection from the wind, and momentarily I’m transported back to the Sahara.

In the middle of the circle, kids perform impromptu dances and behind us two young women twirl hula hoops, dipping and twisting them around their hips, arms, legs, and heads at impossible angles. And the drums play on…

Around nine, we leave the beach energized and elated. The moon is up there somewhere still tucked behind the clouds but the universe has smiled on us, offering up two hours of communal joy. 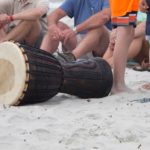 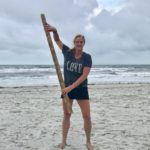 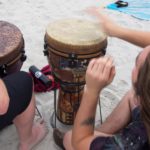 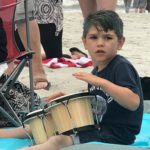 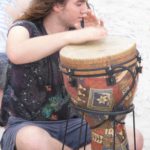