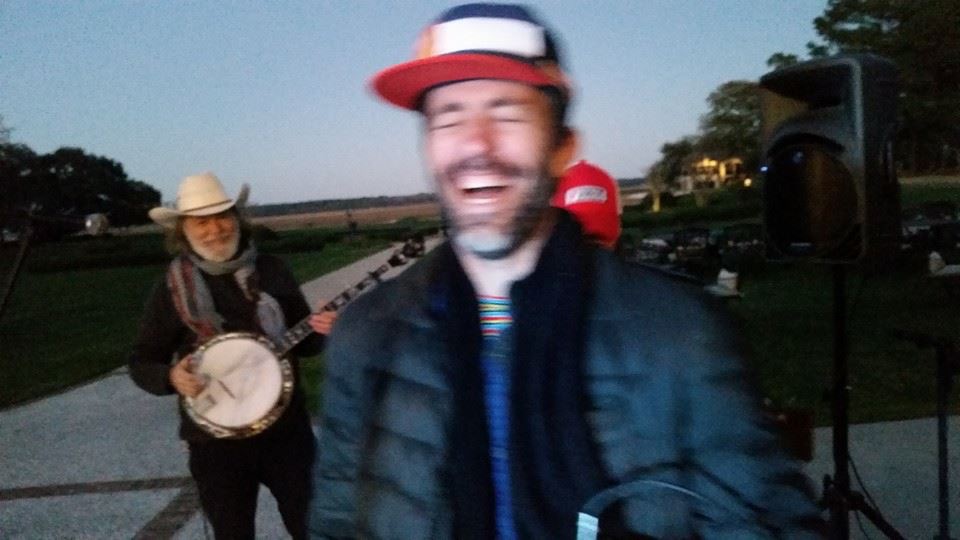 An Ode To My Dad

My performances involve music. And my dad. My brother used to be the drummer. My mom was the singer. “What’s it like being in a band with your dad?” I’m asked that a lot.  I like being asked that and giving a jaded reply. “OH IT’S FUUUUUUNNNNN!!!”, then I walk away and say something barely audible like “have you ever worked with YOUR dad”. Then I’ll turn around and watch as their faces morph. They’re horror stricken. But none of this makes sense unless we delve into what it was like for me to play with my brother from my real mother. Or my mother.

My mom always wanted to sing. My dad wanted to play guitar, I think. His father played “big rock candy mountain” on the tenor banjo. My mom’s mom could play piano. I remember that much about “mom-mom”.  So my parents met, did their thing, and got married. My dad’s mother wore a black dress to the wedding because my Irish father was marrying my ‘Dego’ {Italian} mother. They married anyway, and soon my mom decided we were gonna move to St. Thomas. Thus her singing career began. My dad had a Fender Precision bass and they we went down, grew long hair EVERYWHERE and they started a band with Donnie Edwards, a local cat.  They played gigs at Larry’s Hideaway and my mother was instantly transformed into this She Demon rocker onstage. She had a way of glaring/staring into people’s souls. My father always compares my stage antics to my mom’s. Maybe because I wear lipstick and a wig sometimes and have been banned from local bars more than once for teasing people in the crowd. But I’m supposed to be writing about what it’s like playing with my dad.

The stalwart of the HHI music scene. Sure there are local guys who can play saxophone, dance and sing super sexy. A few of them have played on HHI for 40 years. But I guarantee that none of them take the time or enjoy rapping with the peeps that frequent our gigs as much as my dad, Mike Daly. “Man-Daddy”. “Dad”.  My dad has kind of always been in the background musically. Even he will admit that. People are always telling me to “turn my dad up”. I tell them to ‘shut up” and they laugh. They know me and expect brashness. But the whole reason I have a roof over my head right now is my dad. The same reason my brother Gavan went to USC on a trombone scholarship. My dad.  Who put the bands together so my mom could sing Janis Joplin onstage and be the front person all those years. She passed away in ’99. My youngest brother Kieran stormed NYC as a 17 year old and played shows with underground phenoms like Tim Berne and Jim Black, among others.

My dad says funny stuff on the mic. Funny to how many people in the crowd you ask? Well…usually his jokes don’t elicit that much laughter. My dad’s jokes have been festering in his head since he saw Chuck Berry live on TV and his father poked fun at the chicken walk Chuck did as he played. Since Bing Crosby sang, since the days of Big Bands. Those jokes inside my dad’s head kept working and churning, so occasionally he steps up to the microphone and starts talking. “Are we still friends with the Russians?” then we rip into his song “I love you Maria Sharapova” and people finally ‘get him’. The white trimmed beard, the white cowboy hat. The banjo. He clambers/half falling offstage and there’s usually a 30 something making a bee-line for my dad.  To rap with ‘Pops’. He spins tales about seeing the Grateful Dead in 1968 when Jerry had pigtails and such, but what is it like playing in a band with your dad?

Sometimes I glance over at my dad, the guy who worked the ‘window’ at the Post Office for 29 years. Wearing sunglasses and saying ‘yes sir’. The guy who MADE me come into his room and listen to guitar played by Johnnny Winter and Jackson Browne. It always smelled kinda weird in there. But this is a guy who has lived music his whole life without totally understanding all the notes, scales, blah blah blah. He just loves it. And sometimes when I look over there I wonder if I’m turning my kids on in the same way. And it kinda makes you wonder. Is my Dad cooler than me?